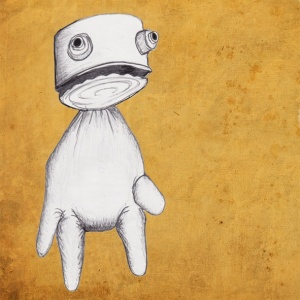 One day in Garbage City, Fin falls with a splat. Floss tumble weeds flutter by, butterfly bandaids stick to themselves, tincan towers loom above…

Things get gooey in this bittersweet puppet show that will have you on the edge of your teat.

Fin was devised originally for an assessment, but from that grew an obsession with gloves and cans. I developed Fin into a full-length work with the assistance of fellow puppeteers Iris Radovic and Gina Moss, and presented seasons at the Melbourne and Adelaide Fringe Festivals.